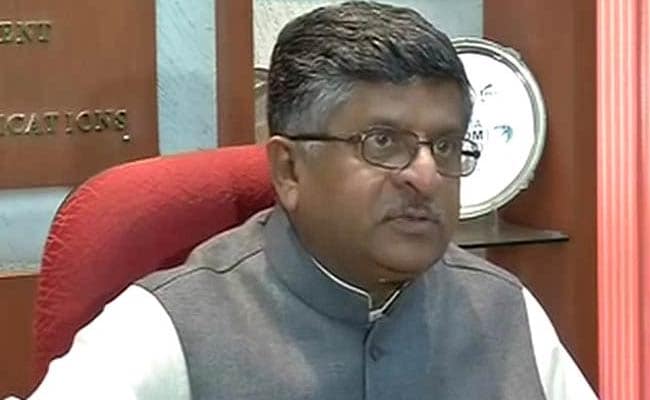 NEW DELHI:  Committing himself to keep the internet equally accessible to all users, Telecom and IT Minister Ravi Shankar Prasad today said blocking and deliberate slowing down or speeding up of lawful content on the web should not be allowed.
With over a million users opposing TRAI's consultation paper on allowing telecom companies to charge consumers differently for using different websites and mobile applications, he said the government had powers to give directions to the regulator on public policy.

He, however, said the implications of net neutrality would need detailed expert examination with regard to traffic management, national security, integrity of network and investment in infrastructure.

"This is what governments and regulators all over the world are grappling with," he said.

TRAI's powers to regulate tariff and quality of service are subject to overall public policy of government and "the government has sufficient powers under the TRAI Act to invoke its national policy objectives to give directions to TRAI," he said.

Since TRAI issued the consultation paper on March 27, there has been a viral crusade by campaigners for net neutrality - the principle that all traffic on the Internet should be treated equally.

They argue they are spending money developing infrastructure, on which those services are piggybacking. Opponents say differential pricing undermines net neutrality, a principle some countries, including the US, endorse.

"Government stands for ensuring non-discriminatory access to internet for all citizens of the country and current debate on net neutrality should be seen from this perspective while resolving the issues harmoniously and consistent with constitutional and economic principles," Mr Prasad said.

The Minister said a committee constituted with the mandate to recommend overall policy and technical responses to net neutrality is expected to summit its report by month end.

Based on the panel's recommendation, the government will take a structured view on the way forward, Mr Prasad said.

"Let me begin by making a commitment, an assurance to this House and through the House to the people of India - this Government is committed to the fundamental principles and concept of net neutrality ie keep the Internet accessible and available to all without discrimination," he said.

The Minister said it was imperative that non- discriminatory Internet ecosystem is not just fostered but also preserved.

Very few countries, he said, have opted for specific legislation for enforcement of net neutrality provisions.
Nations like Australia, Korea and New Zealand have no specific measures as existing mechanism is often considered sufficient.

Nations like European Commission, Japan and the UK have light-handed regulatory measures while the US, Brazil, Chile and the Netherlands have specific legislative measures to enforce no blocking and no discrimination in treatment of traffic.

Stating that Internet has emerged as a destination for public discourse, he said, "Just as India values its constitutional guarantees of freedom of speech and expression, it also values an Internet that is open."

Prasad said there are nuances to the issue of net neutrality which need deliberation to make it more meaningful.

"The debate in India has gathered over the suo moto consultation paper issued by the TRAI which asked for responses to a number of questions concerning the regulation of OTT players," he said. "If the issue did not have nuances to it, why then would experts and regulators all over the world be breaking their heads over it."

The Modi Government's Digital India programme is designed to bridge the divide between the digital haves and digital have-nots and reach digital connectivity to a billion citizens, he said.

"Digital India has basically three components - creation of digital infrastructure as a utility for the citizens of India, digital delivery of services and digital empowerment of citizens," he said.

04 Dec 2017
GIPO Workshop at IGF2017
04 Jun 2017
GIPO Dashboard successfully deployed on the EuroDIG website
15 Jan 2017
The final version of the GIPO Tool has been released!
END_OF_DOCUMENT_TOKEN_TO_BE_REPLACED